Four Western Mountains Senior College courses are coming up just in time for you to renew your membership and sign up.

For thirty-six years Cheri Thurston has been in the very middle of Bethel’s real estate happenings. Now that she is retired, Cheri will take time to present an overview of the history, trends, and challenges of selling property in the Western Maine area.

A leisurely, easy, one mile (round trip) hike along beautiful Step Falls. It is the perfect time to enjoy the wildflowers and waterfalls, and before the summer crowds arrive. Be sure to bring appropriate footwear, water, and insect repellent.

Come see THE ARK” and learn how it was made. Not your ordinary plastic kayak – THE ARK – is much lighter and is a joy to paddle and handle. Fabricating it offers both a challenging woodworking project and the opportunity for individual artistic expression. Hear about how its hull was crafted, how inlays were set in to give it its uniqueness, and about other similar watercraft. Also, see a demonstration of the age-old boat building skill of wood steam bending.

Explore a new trail in our search for wildflowers. The Mystery Mountain Trail is a 1.5 mile round trip hiking trail. Maine Trail Finder describes the trail as moderate. Our pace will be comfortable as we enjoy the flowers and the views.  Mystery Mountain Trail is in Rumford Point, just off of Route 2. Look for the Trail Sign at 1782 Rt 2 where you enter for the parking lot and Trail. Footwear should be appropriate for hiking in the woods. You may want to bring water, a snack, insect repellent and sun lotion.

Don't forget we have reciprocal membership in the Maine Senior College Network!
As a member of Western Mountains Senior College, you can sign up for online classes at sister colleges. You do not pay membership fees, just the class fee!

Keep your eye on the MSCN website's "What's Happening?" web page.
This is our "breaking news" page. We post notifications about upcoming events and opportunities here.

Online Zoom Classes
Our online classes are top-rated, especially in the winter. There is no shoveling snow to get to your car, no scraping ice off your windscreen, no slippery roads, and no parking! Simply sign up for your class and click on a link to join at the appointed hour. Bring a nice hot drink and sit down with your fellow lifelong learners from across the state.

Advantages to Zoom? - Yes, there are some!
We know that everyone wants to get back to meeting in person as soon as they feel safe. In the meantime, consider taking an online class or sitting in on a lunchtime lecture. There are even some advantages to online courses! On Zoom, you can see everyone's face (not the back of their heads), you can hear clearly, and before you know it, you forget all about the technology and the geographical distance separating you from each other.

Need help with Zoom?
If you need any help using Zoom, send an email to the MSCN office, and we will do all we can to assist you.

Zoom Tipsheets
You can also find Zoom guides designed for MSCN members and instructors on our Zoom Tipsheet web page.

Senior College Players are ready to entertain you with five quirky one-act plays at their performances on Friday, Nov. 19, and Saturday, Nov. 20, from 7-9 pm at the Gould Academy’s McLaughlin Auditorium. The Players missed performing last year due to COVID and are anxious to return and highlight their talents for their friends and neighbors.

Posted by Western Mountains Senior College at 6:07 AM

Senior College Players Are Back with Performances November 19 and 20

“We’re Back – with an evening of quirky one-act plays,” claims Ray Leghart, facilitator, Senior College Players. Due to COVID, last year was the only year the Players did not perform since they started in 2006. Performances will be held Friday, Nov. 19, and Saturday, Nov. 20, from 7 to 9 pm at Gould Academy’s McLaughlin Auditorium.

The Players, although “amateur thespians,” challenge themselves in the art of theater and are anxious to return and highlight their talents for their friends and neighbors.

One of the five comedy plays includes “Gin and Tonic,” by John Clifford with Rosabelle Tifft as Olive and Bill Schuellein as Stan. The dating service is down the hall, but that does not mean some sparks cannot start flying between these two characters.

“After the Ball” by Fred Stoppel, features Ray Leghart as Stewart and Arita Zitoli as Joanna. Their friend, Charlie, knew how to put the “fun” into his funeral. Stewart and Joanna, a married couple, share their reactions to the event and how it affected them, some of it good, and some of it not so much.

Jack Kuchta, as a client, and John Reilly, as the psychologist, perform in “Your Mother’s Butt,” by Alan Ball. Sometimes a belt is just a belt. Things happen when a man seeking help with his lack of joy in life, ends up finding a shopping trip might be all he needs.

“Chocolate,” by Frederick Soppel, casts Tim LeConey as a detective, and Lorrie Hoeh as Mrs. Colby. An investigation of a missing person leads to chocolate, of course.

The final play, “Welcome to Acceptance,” by Terryl Paisdte, includes Marianne Goff-Dumont as Mrs. Melcher and Bill Schuellein as Sam. Sam robs banks for a living. Mrs. Melcher just started as a bank teller, but she’s got more tricks up her sleeve that Sam could possibly expect.


Posted by Western Mountains Senior College at 9:20 AM

The Stress of Aging: Growing Old Is Not for Sissies!

On April 4th, at the West Parish Congregational Church, a panel of experts presented a program on STRESS as it affects the older population. The event was sponsored by the To Your Health committee of Western Mountain Senior College, The Bethel Health Center, and MSAD#44 Continuing Education. The panel included Brie Weisman, OTR/L; Jane Chandler, R.N., BSN; Karen Reilly, Sc.D.; Rev. Dr.Tim LeConey; and Wendy Youmans, LCSW. Ellen Cocker, M.Ed. served as moderator.


The speakers detailed the physical, mental, emotional and spiritual challenges that are a normal part of aging. We learned how important it is to our health to recognize and find ways to deal with stress. The loss of a loved one, moving away from the community, financial worries, loss of independence, fear of death.....these are common stressors. We cannot do all we once did. We may feel an estrangement from ourselves because we are no longer the same person. How to manage? How to find purpose? Joy?


Among the footnotes provided by the panel: Be sure our Doctors know about all of our medications. Poor posture increases your risk of falling. Oldsters have more cavities than youngsters! Maine not only has a high percentage of elders, it has increased cases of depression.

The second half of the program was given over to the audience. Many had suggestions and some themes kept coming up. Love of music for one. Enjoyment of the outdoors, gardening, taking classes, having a pet were others.

Resources mentioned were AARP, the Age Friendly Community Initiative (200 rides were provided last year by the Neighbor-to-Neighbor Program), the University of Maine system, and the many overlapping organizations in the area.


Here’s the bottom line. Stay physically and mentally active. Search out whatever brings you joy. Lastly, make connections because that will give you a purpose for being and doing. And it can help RELIEVE STRESS!


Posted by Western Mountains Senior College at 9:15 AM

Photos from the Mardi Gras Potluck

Thanks to Peter Musso, Bonnie Pooley and Kathleen DeVore for taking these photos at last week's Potluck supper.
Posted by Western Mountains Senior College at 6:04 AM

Photos from "It's a Pasta Party!"

Enjoy these photos from Cathi Dicocco's To Your Health presentation on making pasta.  As you can see, she put us to work! Thank you for the photos, Peter Musso. 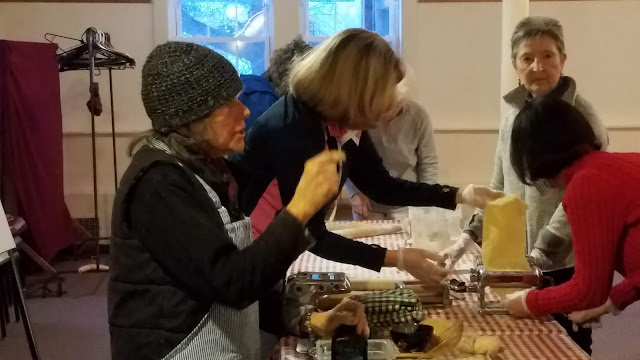 Posted by Western Mountains Senior College at 6:04 AM

On Thursday, February 7, Dr. Daniel van Buren spoke to a To Your Health audience on Atrial Fibrillation (AF) and the most recent developments in treatment.

Individuals with AF have a problem with the heart's electrical system. Very simply, disorganized electrical activity in the upper chambers causes the lower chambers to beat erratically. Blood is not pumped properly, which results in the formation of clots, hence the greatly increased risk of stroke.

Because of the increased risk of stroke, medication that inhibits clot formation is usually prescribed. Traditionally, that drug has been Warfarin, but Warfarin requires a great deal of tweaking and monitoring, which has led to under treatment. Newer drugs are now available that have proven to be at least as effective as Warfarin, at least as safe, and do not require constant monitoring, and the price is coming down. The downside with any blood thinner is the risk of bleeding, but in the case of preventing stroke the benefits outweigh the risks.

A really encouraging new development is the Watchman Device. Most clots form in the left atrial appendage. The Watchman Device is inserted over the opening to the appendage to prevent blood from entering and clots from forming. Dr. van Buren says it’s almost too good to be true; except for the need for and the cost of a procedure, so far there are no negatives.

The next To Your Health presentation, “It’s a Pasta Party!”, will be held on Thursday, March 7 from 4:30 – 6:00 at the West Parish Congregational Church. It is free and open to the public.
Posted by Western Mountains Senior College at 6:22 PM

Teachers, facilitators, and those producing promotional materials, please take notice. With the changes taking place at the Bethel Citizen office, we will no longer use them for black and white 8.5x11 inch photocopying. We have made an arrangement with the Telstar Adult Education Office to use their copier. For larger size copies, posters etc. we will continue to use the Bethel Citizen, but be prepared to pay for the copies up front and get reimbursed.

As always, please respect environmental concerns and our budget limitations:
Posted by Western Mountains Senior College at 10:11 AM

The Senior Players are dedicating this year’s performance to Tineke Ouwinga, one of the original members of the group. Tineke was always willing to take on any role, no matter how difficult or silly the part. Her creativity extended to directorial advice, costume design and even finding appropriate plays for the group. We all miss her, as will the audience members who watched her over the past twelve years.

Now about this year's plays. Lorrie Hoeh and Melinda Remington star as two charming Southern ladies in Griddle Cakes by Mark Rigney. Not to be outdone, Jim McClean and Ray Leghart face off across the checker board in Who’s Turn Is It by Philip Potak. Mariann Goff and Tim LeConey show what happens when government agencies collide in Spies by David J. LeMasters. And then Tim LeConey, Lorrie Hoeh, Ray Leghart, Jim McClean and Jack Kuchta show us what a great mystery writer Arthur Conan Doyle was in his The Dying Detective.

Performances are on November 16 and 17 at 7:00 pm in the McLauglin Science Center, Gould Academy, Bethel. Admission is free and refreshments will be available. Come and enjoy the show!

Western Mountains Senior College
Bethel, Maine, United States
Our mission: To support lifelong learners in their quest for new knowledge and experience by providing a variety of programs and activities. WMSC cherishes the ideals of open-mindedness and respect for all people, ideas and philosophies. We encourage the honest exchange of ideas and opinions, acknowledging and honoring the diversity amongst us. For more information about Western Mountains Senior College visit our website at http://sad44.maineadulted.org/western_mountains_senior_college