Be a friendly persuader...

Do you have a friend who doesn't know about our very own Western Mountains Senior College--or needs a gentle push to take a course?  Talk to them!  Share their email and mailing addresses with us so we make sure they have the new brochure!  Bring them to one of your classes as a guest.  Encourage them to take a one-day class such as Isn't It Just a Dirty Old Mill Town? (a walking tour of  Rumford) or Medical Grand Rounds.

Some courses are still open:  Drawing and Painting, Senior College Players, Making Your Personality Work For You, Digital Devices Part 2 and Creative Writing.

(Guests are welcome at extended classes.  Just alert Irene Kuchta at 201-788-8817 or ikuchta@ramapo.edu).
Thank you!  We look forward to making new friends!


For more information about Western Mountains Senior College visit our website at http://sad44.maineadulted.org/western_mountains_senior_college

Posted by Western Mountains Senior College at 9:49 AM

Who knew that visiting local gravel pits could be so interesting? 25,000 years ago, when the glacier covered where we live, melt-water flowed into crevasses and created a raging river flowing through a tunnel in the ice. The tunnel was partially filled with rock debris that washed in, and the river tumbled it along, turning it into sand and gravel. When the glacier retreated the sand and gravel were left behind, forming an esker. Here are a few photos from Saturday's field trip along the Ancestral Androscoggin Esker with Bob Elliott. 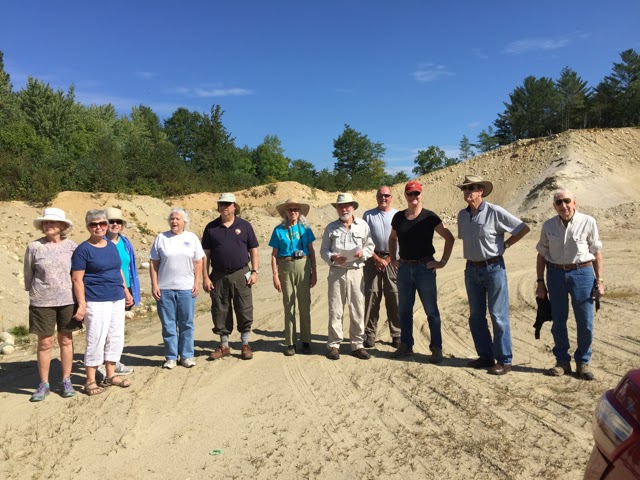 The group. We began the trip on Route 5 along the Ellis River north of Rumford Point, about a mile north of Route 2. You can see the mix of sand and rock in the background, just as it was left behind by the glacier, then exposed by excavations to build roads and bridges, etc. Photo: Wendy Hutchins. 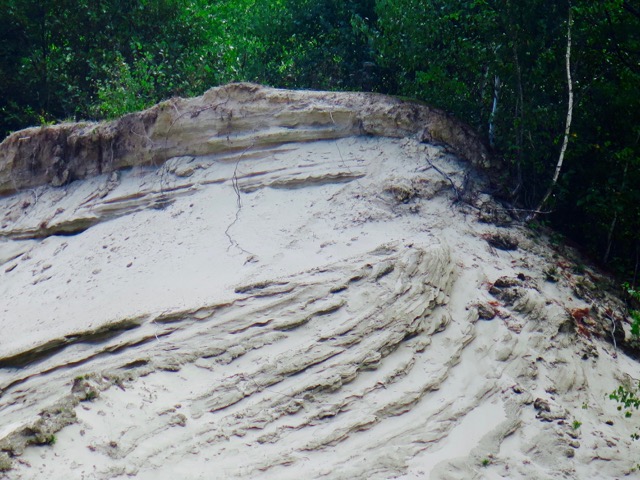 Layering in rings of the sand that filled the depression where an ice block melted, creating a kettle on the east edge of the esker. Because of the excavation, we now see the kettle-fill in cross-section.
Photo: Pat Stewart. 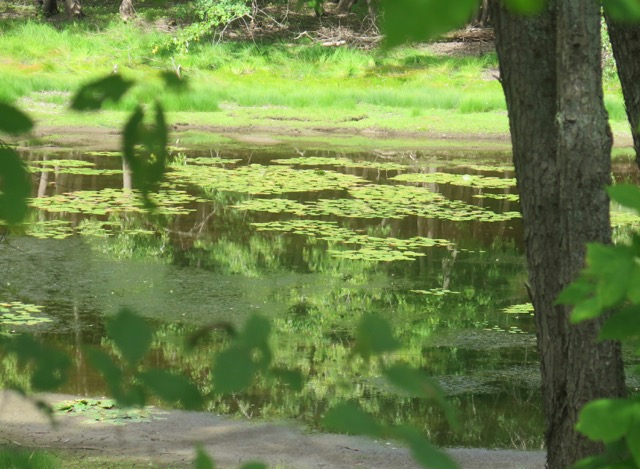 Little Davis Pond, a kettle pond across Route 5 from the gravel pit. Kettles formed where partially buried ice blocks melted to form a depression in the outwash. Kettles are more often found on the west side of glacial valleys than on the east side. The ice on the east melts faster because that side of the valley gets more of the sun’s heat during the day. Photo: Pat Stewart. 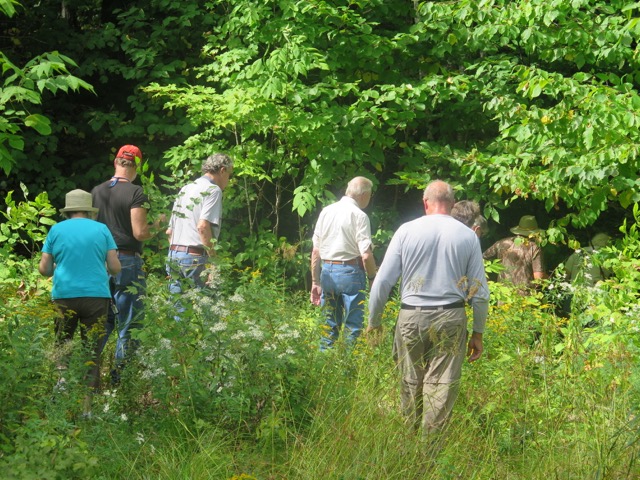 Going into the woods at the base of the esker to at least look up at it, about .4 mile north of Route 2. Photo: Pat Stewart. 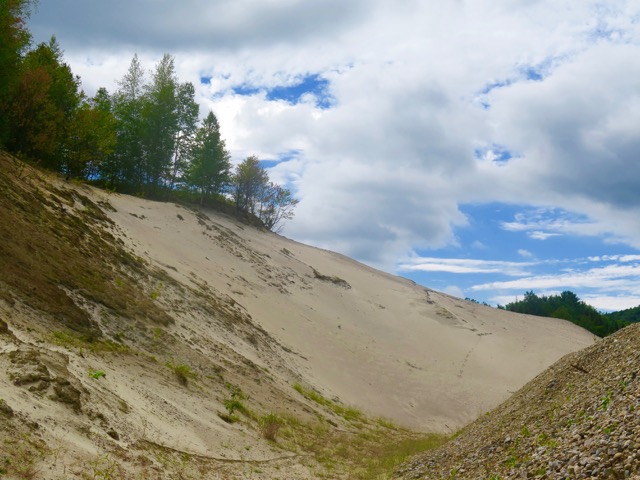 Just off Route 232 at the south end of Milton Village, Bob showed us an unusual example of a section of the esker that contains a lot of finer sand. He explained how there were hurricane-force winds blowing off the glacier toward the oceans and the Great Plains, picking up and depositing the finer particles. Some of those finer particles ended up in the melt-water and thus in the esker. Photo: Pat Stewart. 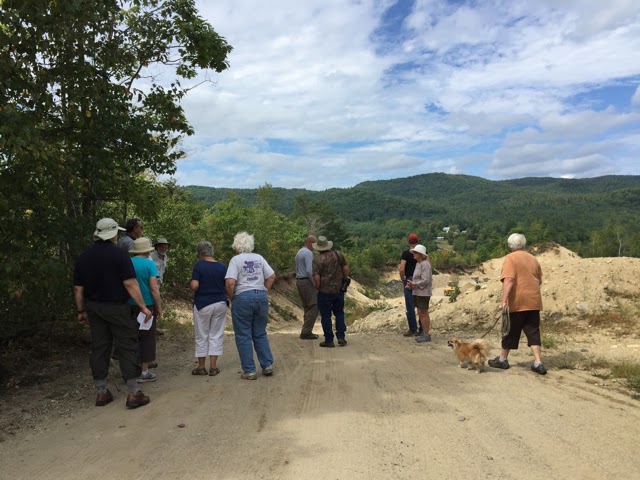 Along the Whale's Back on Route 232 in Woodstock. Just right of center in the distance is the farm across the valley, at the top of the first hill along the Gore Rd., headed toward Locke Mills. Below that in the bottom of the pit is the bucket loader used to work the gravel pit. Photo: Wendy Hutchins. 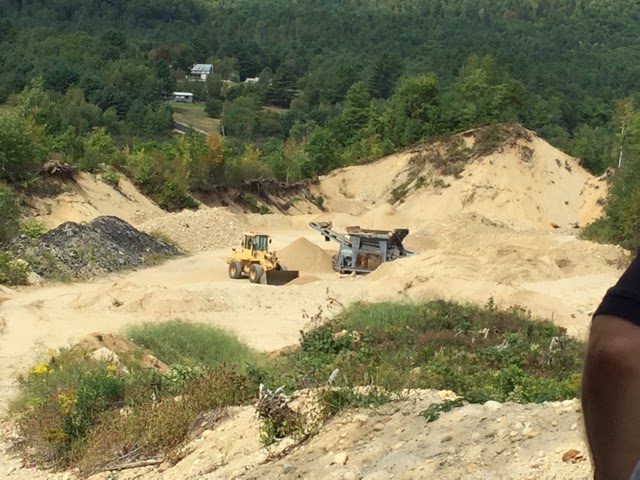 A closer view showing the excavator and sorter in the Whale's Back gravel pit. Notice the pile of fine sand in front of the sorter. This is the sand that your town will use for treating roads next winter!
Photo: Wendy Hutchins. 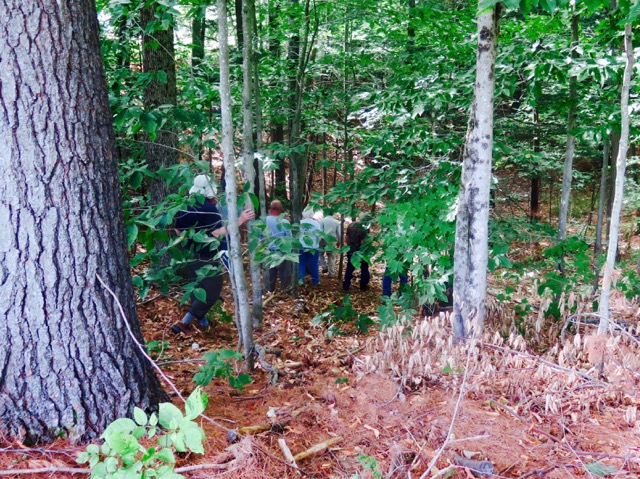 Last stop of the trip. Descending into “The Amphitheater” in Bryant Pond, a perfectly round kettle. Back in the early 1900s it was equipped with benches and a stage for high school graduations and concerts, etc. Photo: Pat Stewart.

For more information about Western Mountains Senior College visit our website at http://sad44.maineadulted.org/western_mountains_senior_college

Posted by Western Mountains Senior College at 9:47 AM

Western Mountains Senior College
Bethel, Maine, United States
Our mission: To support lifelong learners in their quest for new knowledge and experience by providing a variety of programs and activities. WMSC cherishes the ideals of open-mindedness and respect for all people, ideas and philosophies. We encourage the honest exchange of ideas and opinions, acknowledging and honoring the diversity amongst us. For more information about Western Mountains Senior College visit our website at http://sad44.maineadulted.org/western_mountains_senior_college